Recently fishing conditions in the British Virgin Island have been tough. High winds have been causing an increase in wave size. We have been hit with a series of small craft advisories but the weather seems to be getting better. Despite the conditions I have made a few trips down to the east end of Tortola to try my luck with the tarpon. As each day passes my confidence grows and as a result I have been hooking into more fish.

I recently fished with a fellow named Mike who was visiting briefly from the United States with his son Max. He introduced me to a few lures that he claimed worked well for tarpon but I was skeptical. We both fished live bait majority of the two nights we fished together and hooked in to several fish but I was the only one who managed to bring in a tarpon. It was nice having the company of someone who has experience catching tarpon and I was able to develop some tactics that have been producing ever since. I certainly became a believer in using artificial baits for tarpon.

I’m currently waiting on Mike to email over the photos of the tarpon from the other day but here are a few pictures from last night. I caught this good sized jack about twenty minutes after loosing a good sized tarpon. Both fish hit artificial baits, and unfortunately the jack completely engulfed my lure before I had the chance to take pictures of it. 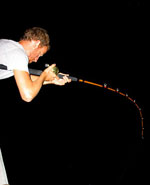 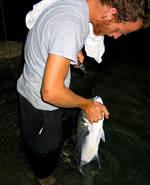