I’ve been very busy these past few weeks traveling and working, but I’ve got some great content coming from my brief stay in Maui, and as soon as I can find the time I’ll get it all posted here. Meanwhile Adam Guy and I were chatting, he’s a great source for all things Japanese, and he told me that he had another food article ready to go. So back again, another installment in the growing “From The Table of Adam Guy” series, another mouth-watering meal.

And be sure to check out some of the other great contributions from Adam like, Japanese Cuttlefish, Japanese Flounder, and Fugu.

Summer for Tokyo fishermen means octopus fishing by day, and night-fishing for Japanese conger eel. The octopus known in Japanese as “madako” (Octopus vulgaris, Common octopus) is cherished as a delicacy, eaten commonly as sashimi or served boiled as a celebratory dish for New Year’s.

To catch such octopus, one employs a special tackle comprising a hooked, weighted wooden board about eight inches in length, to which a crab is tied, upside-down. Octopi apparently have a great weakness for crab, particularly those with their vulnerable underbelly exposed to attack. The baited device is lowered into the water using a thick nylon/polyester line, and then jigged up-and-down by hand on the seafloor. Octopus usually feel the bait with their tentacles before launching themselves onto it, and this can be felt in one’s hands as a sort of ‘sticking’ feeling. On feeling the ‘stickiness’ on the line becoming much heavier, signalling the octopus actually attaching itself to the bait and starting to feed, a violent and large yank upwards on the line with both one’s hands sets the hooks into the creature and then it is a slow process of hauling in the line by hand to the surface. 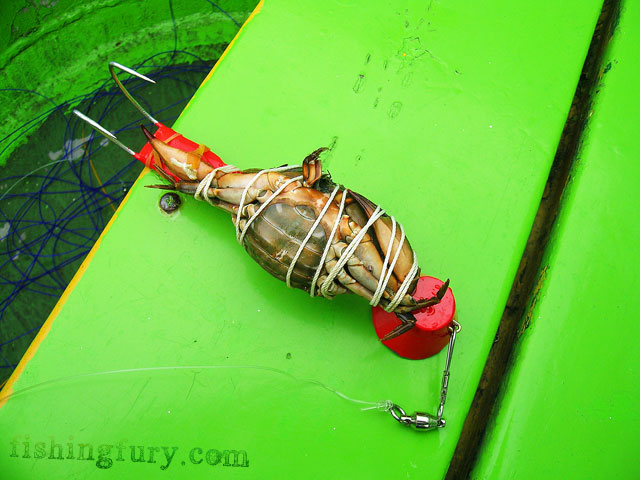 Be sure to check out some of the other great contributions from Adam like, Japanese Cuttlefish, Japanese Flounder, and Fugu.

I was in luck last week and managed to snag a brace; both came in at about 1.5kg (3.3lbs) each. First off I made tentacle sashimi, stripping off its skin and sucker cups. The flesh is sweet but with a firm texture, and very delicious with freshly ground wasabi and soy sauce. Next I parboiled the legs in Japanese tea, cooled, sliced and served with shredded vegetables, sliced spring onions, grated daikon radish and red chilli. This is served, like fugu sashimi, not with soy sauce but with ponzu. I also boiled some up in a mirin-sweetened soy sauce broth, along with large chunks of chopped daikon, for a whole day and night. Both the octopus and the daikon take on the colour of the sauce nicely, and the rich, sweet flavour gets right through to the middle. Lastly, I gathered all the offcuts, suckercups, end-bits and leftovers which I would not stand to waste, and threw them into a Chinese-style fried rice with some vegetables.

I hope you enjoy the photos as much as I enjoyed the eating!

Adam Guy
After growing up in London (England) Adam has now returned to the city of his birth, Tokyo, where he lives and works as a biologist. He enjoys cooking in the evening with the day’s catch, using both Japanese recipes and those of his own creation, almost as much as he enjoys the actual fishing. Choosing what sake rice wine to go with the fish is another pleasure. Although Japan is probably more famous among fishermen in the West for its high-technology fishing tackle companies, recently he has become interested in traditional Japanese fishing techniques, using older tackle such as bamboo rods. In between fishing trips, he also enjoys reading, travelling and painting.