It is said that the world greatest sport fish it the Tarpon (Megalops Atlanticus). With its brute strength and acrobatic displays its no wonder they call this fish the (silver)king. I was lucky enough to catch several tarpon in the British Virgin Islands a couple of years ago. I’ve never caught a fish with such power and agility and I have been obsessed with them ever since constantly reading about them and viewing pictures of 200 pound giants. When I show people photos of the tarpon I caught, they are always amazed by how big they are, but the fish I caught were just babies compared to some of the world records. 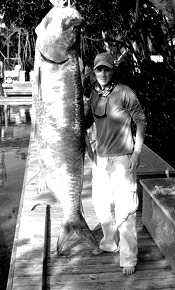 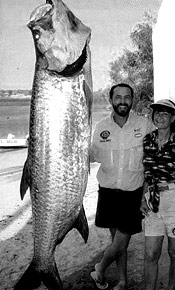 The current world record (far right) was caught by Max Domecq on March 20, 2003. The massive tarpon weighed in at 286lb 9oz (130kgs) and was caught in Rubane, Guinea-Bissau, Africa.