I remember the first time I ever saw a roosterfish, it was just a few years ago. When you’ve seen a roosterfish, you never forget it. The defining characteristic of a rooster is their unusual dorsal fin, composed of 7 very long spines. While they feed near the surface, often all that can be seen are these spines.

The roosterfish can be found from southern California to Peru and is known for mostly as a sport fish rather than an eating fish. The current all tackle world record roosterfish is 114 pounds and was caught in La Paz, Mexico.

I think it’s pretty safe to see that the Baja offers the best chances of a new world record and it wouldn’t surprise me if the next world record was caught by a client of Fishermen’s Fleet (They already hold the record for snapper). Word on the street is, a new record has already caught, by a man named Bill Mathias (no relation to me, I think) but it was released to swim another day. Bill has been a longtime client of David’s Fishermen’s Fleet and is said to be one of the best rooster-fishermen in the world.

“It crossed my mind that maybe I ought to keep it,” Mathias said of his 124-pound all-tackle breaker. “It was an obvious world record. But, then I decided I just couldn’t. I have a fixation on those stupid fish. They have such a nice surface strike.” – Bill Mathias 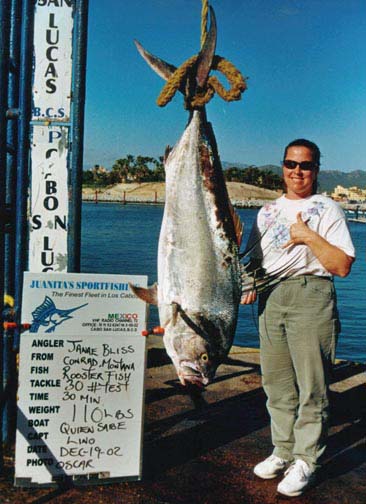 A massive roosterfish, just 4 pounds shy of a world record.