The only possession I have left that belonged to my father is his fishing album. He spent a lot of time on the water and was a fishing charter captain in the Caribbean for many years. In the 1970’s, long before I was born he was helping people catch marlin, tuna, sailfish and more. My father knew a lot of fishermen, but perhaps none as renowned as Capt. Cornelius Choy. Choy was one of Hawaii’s greatest sport fishermen and holds the record for largest blue marlin caught on a rod and reel, weighing an incredible 1805 pounds!

As any good fisherman would, Choy took the opportunity to brag to my pops about record fish… 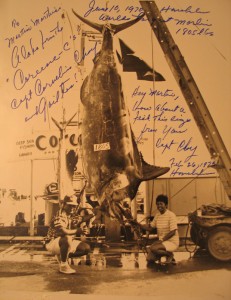 This massive fish was never acknowledged as a record by the IGFA since it was reeled in by more than one person. The only marlin ever caught that was larger than Choy’s Monster, was caught by a commercial fisherman. This giant marlin is said to have weighed over 2200 pounds!

It’s sad to think that the likelihood anyone will ever catch a marlin over 2000 pounds on a rod and reel is basically non-existent. Overfishing of these incredible fish by commercial fishermen could easily lead to their extinction in the not so far off future.