Heres something you don’t see everyday, nearly 1500 sturgeon, struggling in shallow water after the tide went out in Port Susan Bay, Washington. According to the Seattle News, biologists speculate that the sturgeon were feeding in shallow muddy water and failed to get back to deeper water before the tide went out. As you can tell by the below photos, many of the fish were huge, some reaching 10+ feet.

“I think these were just fish that were poking around, looking for food,” said Brett Barkdull, a fish biologist with Washington Department of Fish and Wildlife who lives near the stranding area. “These fish have been out here for quite a while now, but I’ve personally never seen anything quite like this.”

It is believed that most of the fish survived long enough for the tide to rise. 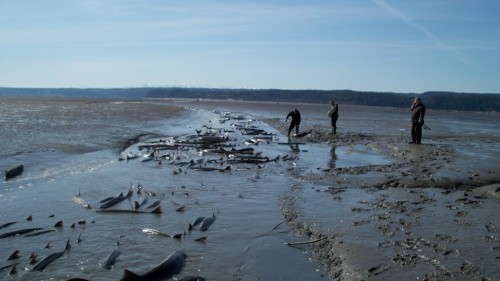 “It looks like they chose to overextend their visit on the mud flats,” James said. “The feeding must have been pretty good.”

via The Female Angle