I’m just getting settled back in after a great two weeks in Ontario. I wish I could say this was a fishing trip, but it was a trip to see the family and some old friends. We flew in to Toronto and spent a couple nights at may parents place before heading two hours west to London, Ontario to visit my sister who had just given birth to a beautiful baby girl. I was hoping to take my son, niece and nephew out for some carp fishing on the Thames River but some pretty serious flood water put a stop to that. We decided a trip to the Toronto Zoo would have to make up for the lack of fishing!

Just about every animal was out and about (no doubt they wanted to see my new Fishing Fury hat), so we took well over a hundred photos at the zoo.

The day after the zoo we had a baby shower to attend before heading north to Kincardine, a small town located on the beautiful shores of Lake Huron. There we stayed with my old friend Ashley, her husband Scott and their two children Bob and Margaret. They have a great little house in the middle of farm land. My son loved the goats and chickens!

My wife Gillian took advantage of Scott’s artistic talents and got her foot tattooed before we left, but not before Scott and I got out to do some fishing. Scott took me down to a nearby river in search of some steelhead trout, and we spotted some right away! We spotted several good size trout in the river but couldn’t coax any to bite. Scott spotted to nice size fish in the distance and army crawled into location with his fly rod. I helped direct him where to drop his fly while he lay on his stomach and seconds after the fly hit the water a nice little pike went air born! We were both surprised to see a pike in the little river, and even more surprised that Scott was able to land it with a really light leader. I climbed into the river to land the pike. 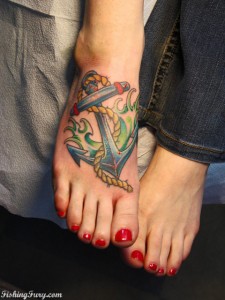 You may remember some of Scott Duncan’s fish tattoos – I was super jealous that I wasn’t getting tattooed. Hopefully the next time were in Ontario I can fish with Scott and get tattooed.

Finally, on the day before we were ready to fly home, I made my way to Toronto Islands to meet up with Jon. I got there fairly early and had a chance meeting with one of our readers named Paul. We fished together through a few thunderstorms before Jon met up with us and we saw some sunshine. Paul landed two nice fish and I landed one before we called quits after being pelted by hail.

Despite the lack of fish, we had a wonderful time in Ontario and got to catch up with friends and family. Next time I’ll be sure to visit during bass and muskie season!