I have been, and always will be a firm believer that northern Ontario, Canada has the ability to produce the next world record pike. I’ve caught some huge fish myself in Ontario, and have a few stories about the ones that got away. This particular pike isn’t the biggest Ontario pike I’ve seen either, but its right up there, and its an incredible pike no matter where you’re from. 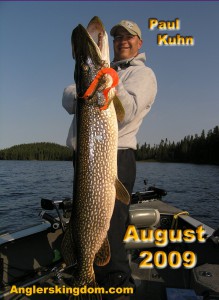 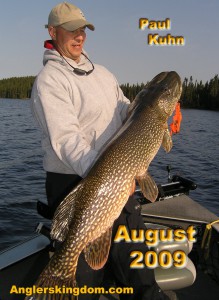 Paul’s pike hit a bulldog he was casting into about 7 feet of water and slowly retrieving out into about 12 feet of water. We had only been fishing for about 5 minutes and were only a five minute boat ride from camp. It doesn’t always happen or happen that quickly but if you keep fishing in the right spot you will eventually be there at the right time. A few days earlier I was guiding another group in that same exact spot. I always put out small dark colored markers. I had a very large pike grab a small walleye and although I had 30lb power pro I had been experimenting with a 4 foot fluorocarbon leader to increase the number of walleye. (it did increase walleye bites) However the pike bit me off after about 5 minutes. Although I hadn’t seen the pike, I shared with my other guests that a large (45″ plus) pike was in the area. We came straight to the exact spot that morning and it worked beautifully. Whether it was the same fish isn’t positive but that scenario has worked for me many times over the years. – Kevin

And a side note to all of you readers who have been to Brett Geary’s Sportsmans Lodge, Nungesser Lake is fairly close by and Anglers Kingdom is run by Brett’s brother Kevin who has caught more then his fair share of enormous pike. Both Little Vermilion and Naungesser have produced several pike over 50 inches.