This is the first video evidence I have ever seen of a live Oarfish swimming in its natural habitat. They truly are remarkable creatures and one can certainly imagine that these are one of the possible explanations for sea serpent stories. One of the strange things is that the fish’s body does not move in a serpentine motion, but instead the very thing and elongated dorsal fin dances back and forth in a fluid wave propelling the fish forward. 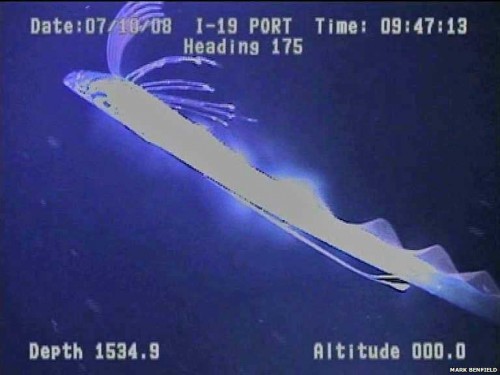 Using a remotely operated vehicle, they caught a rare glimpse of the huge oarfish, perhaps the first sighting of the fish in its natural setting.

The oarfish, which can reach 17m long, has previously only been seen on a few occasions dying at the sea surface, or dead washed ashore.

Their strange appearance may have provided the basis for the sea serpent myths told by early ocean travellers.
Not only are they elongated, they also have a prominent dorsal fin which gives it an unusual “serpent” appearance.
Recalling the event Professor Benfield explained how at first, they thought the fish was simply a drilling pipe called a riser being lowered into the water.

“We saw this bright vertical shiny thing, I said ‘are they lowering more riser?’ as it looked like they were lowering a huge pipe.”

“We zoomed in a little bit and we said ‘that’s not a riser that’s a fish!'” 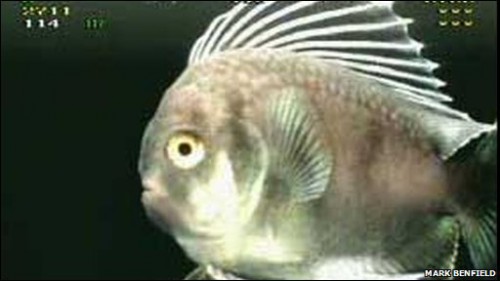 On another ROV survey in the Gulf of Mexico, the team came across the deep sea manefish (Paracaristius sp.).

This observation enabled the scientists to get a rare insight into the behaviour of the fish in its natural environment.

That gave them a further understanding of how it lives and what it looks like.
“When you see manefish collected in trawls they are incredibly beat up, they don’t look like much of a fish at all,” said Professor Benfield.

“So to actually see this fish in its natural habitat with its fins beautifully splayed out almost as a parachute, we get an idea that it’s a really good swimmer.”

Manefish are thought to steal food from or feed on a jellyfish-like animal called a siphonophore.
This may explain why the fish needs to swim so accurately.

“This fish has very precise control over its orientation and position, so if you are in very close proximity to an animal with tentacles that could potentially damage you, you want to able to really precisely control your locomotion.”