In 2004 -even before Fishing Fury started- the Toronto Islands were the first location that Clive and I really put our heads together on. The coordination of our thoughts and efforts combined and together we landed well over a dozen pike in only a few days fishing, it was here on these shores that we developed our own shore fishing tactics, and here that Fishing Fury was born. 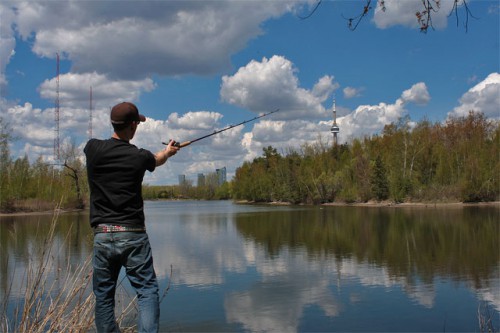 Now six years later, Clive is flying in all the way from Halifax on Porter Airlines and will only be in town for two nights. Though we only have a short time together we intend to spend as much of it fishing as humanly possible. Clive arrived on Monday morning to the Toronto Islands Airport and we wasted no time getting to the ferry docks, where we met up with Pete from the OFN forums. Once on the islands we walked straight off the ferry to the Center Island channel where we set up our gear and started casting.

It was a beautiful warm and sunny day with spotted clouds and low winds. We covered the northern and southern shore line in a leaping pattern spotting several fishermen throughout the area. It’s also quite strange that many of them already knew who we were, and one of the fishermen we met was Den, a member of our forums. We offered him a spot in our line and showed him around the islands as we searched for some deeper water to the east near the yacht club.

It was now about 1pm and we had all settled on a dock near the point where we had some lunch and shot some underwater footage of some new Rockstar Lures, and even some lures that we’re reviewing like The Rodent. As we packed up to leave our shore lunch spot we saw a racoon running across the bridge from Olympic Island. Clive was fast enough to sneak up to the bridge and capture a few shots.

Next, we headed up to the northern end of Olympic Island to see if we could find any pike in the deeper unsheltered waters across from the Toronto Harbour. We may not have caught anything, but the view was spectacular. Even a small pike here would make for a magazine worthy photo. 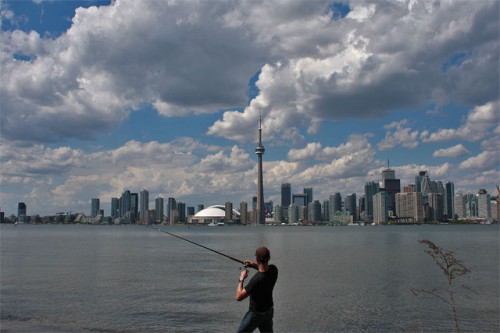 After stopping at a few more open areas of shoreline along the way we went back to the center channel where we started and began the entire process over again. We don’t like to stay in the same place for very long, we like to explore different areas, check other areas we know have produced fish, and most of all keep looking for that pattern. It wasn’t long before we had done just that, Den was the first to catch a pike- his first in fact, and Pete was hooking into another by the time Den had released his. Things were starting to heat up, the evening bite was on and we were in a prime location. 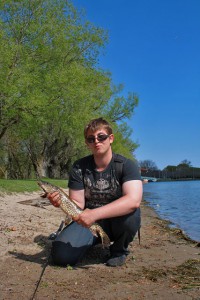 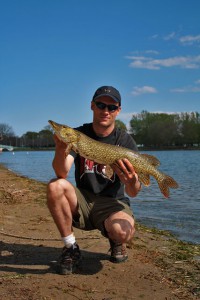 As we continued to cover the shore line we made it to the amphitheater along the center channel, this is a very deep spot that has good weed coverage, and if you can time it right in between the docking boats you’ll have a chance at an ambushing northern. Sure enough on my second or third cast a big swirl formed behind my Rapala Glidin’ Rap and a pike smashed the bait from the side. I pulled the pike around the side and jumped down to get a better handle on things. The pike was hooked deep, but not near the gills, after a quick inspection I knew immediately the fastest and best way to handle this was to cut one of the points from my treble. Otherwise I might risk too much damage to the fish attempting to get out all three. After a quick snip of my cutters I grabbed the back treble, turned it upside down pulled it right out. A perfect catch, with a perfect release. I always value the life of my catch over my own hooks, and you should too, so always carry a decent pair of wire/bolt cutters.

We carried on and Den was able to catch another pike, his second pike ever- but that would be the last catch of the day. We covered the southern shore one more time, and made a few more casts on the northern side before heading back to catch the 7PM ferry back to the city. It was a great day all around, catching up with old friends, meeting new friends, all wrapped in a wonderful day of fishing. Clive was the only one that did not catch a fish, and I knew that tomorrow he would be hyper-focused on changing that, and would not be willing to leave until he did. 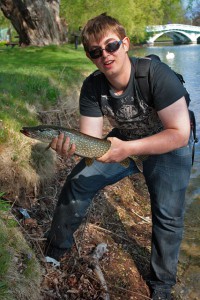 On our second day to the Toronto Islands we were to meet up with Tim Cherry and Jamie Pistili of Big City Fishing and show them around the islands in hopes of putting together enough footage for his show. We started around 11AM and headed straight to Hanlan’s Point, both because the Centre Island ferry was not due for another 30 minutes, and because we knew there were fishing opportunities on Hanlan’s with some great background shots of the CN Tower. Along the way we also ran into Master Basser, another member of the forums, who’s no stranger to catching big fish on Toronto Islands- including Bowfin. 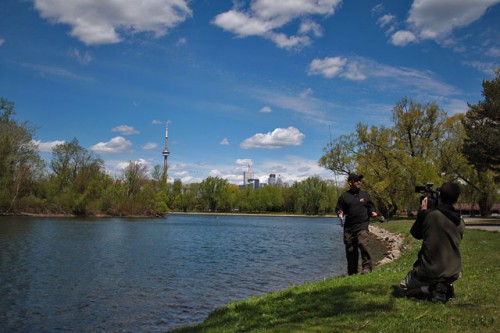 As we walked around the backside of Hanlan’s on our way to Centre Islands we knew there was a nude beach on the western edge, though we were still surprised when we spotted a naked man walking around the area. It was quite amusing at the time, and I played it off as they had just witnessed the elusive hairless albino big foot of Toronto Islands. We continued to Centre Island and made many casts along the southern side of the center channel. There were no signs of pike, though they often turned on later in the evening so we headed to the Center Island pond in search of Carp. 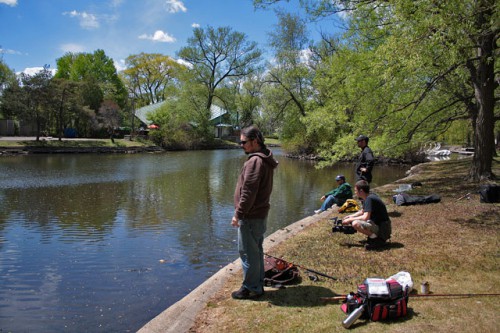 Clive and I were fishing with corn and Jamie was using a carp fishing secret of his own. I swore not the expose his secret bait, but I’m sure he’ll be talking about it on Big City Fishing so be sure to watch! There were some seriously big fish in this pond and they stacked up right around the two small islands. We didn’t have to wait long before Clive was hooked up, but by some fluke the fish was unhooked only a few minutes into the fight. Jamie on the other hand managed to catch a nice sunfish, and a fat bullhead catfish. We saw a few bowfin as well, but they were not interested in any of our baits.

We decided to head back to the center channel in search of pike but the winds from the west were strong and made it difficult to cast. I took the group around to the deeper channel by the yacht club where we could be sheltered from the wind, but again the pike were silent. As the last trek of our day we headed back to the northern side of the center channel and threw every proven pike bait you could imagine. It was very disappointing when they didn’t bite. Clive and I felt ashamed in a way, with the great opportunity we had been given, we came up short. It was now almost 7PM and Jamie and crew had to head back to the city. Though we didn’t catch any pike, our only consolation was that every fisherman we talked to had all said they didn’t catch anything.

Clive was very determined to catch a pike, and I was also unwilling to leave until we caught something. We simply could not take no for an answer- there was a way, there was a fish, and it would be caught. Period. Clive’s determination paid off, and though it was too late for the cameras and the sun was nearly setting, it meant we could at least sleep knowing we did everything we could.

Even though it was Clive’s last day, and the weatherman called for rain in the afternoon we headed to the islands anyway. Since Clive was leaving from the Toronto Islands airport we wouldn’t have to contend with traffic and could squeeze about 3-4 hours of fishing in after running some errands downtown. We started off on the northern side of the center channel again working eastward across the bridge and on to the southern side of the channel. It wasn’t long before another pike took my Glidin’ Rap- and only a few minutes later Clive hooked into a nice pike on a five-of-diamonds spoon. 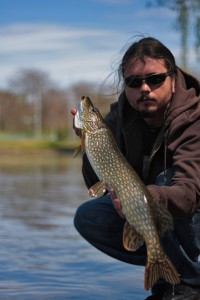 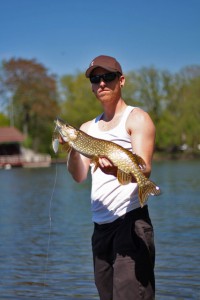 As our time grew short and Clive’s flight time drew near, we headed down to one of our favorite spots for our last few casts. Sure enough, on my very first cast, I hooked into a beautiful Toronto Islands northern pike. 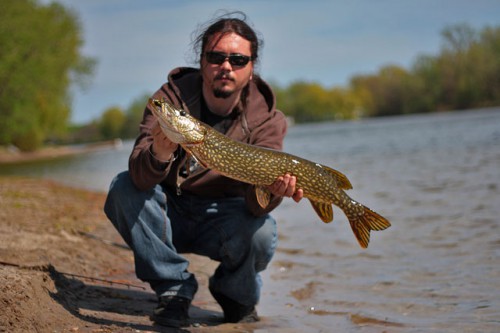 We used every last minute available, time was getting very short. Of course only two minutes before we had to leave, Clive would not be outdone and hooked into another pike. I snapped a few photos and the pike was released. We packed up our gear and headed back to the ferry dock. 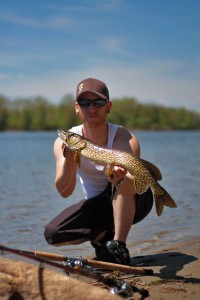 All things said Clive and I had a great time catching up and catching fish. We also got to meet and hang out with many of our followers and share our stories and experiences- and really, thats what this is all about. I would like to thank you again- Tim Cherry, Jamie Pistilli, Kevin the cameraman, and Big City Fishing for the opportunity and we hope that our impressions last longer than your sore legs! 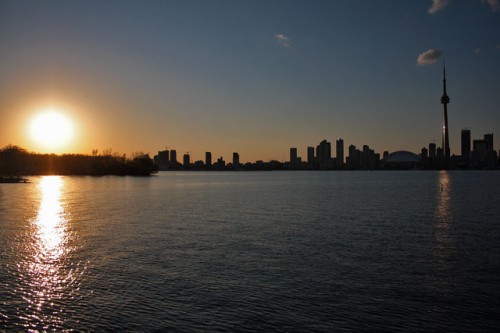