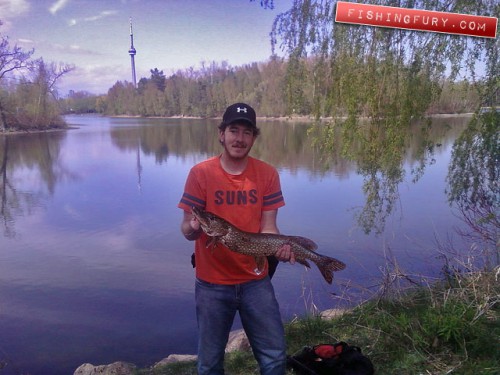 Having read on fishing fury about the pike on Toronto Island I had to give it a try. On opening day I took the ferry over and started fishing as soon as could. I fished for most of the day switching mainly between the lures; a five of diamonds, a red and white daredevil, and a hard silvery minnow imitation. As I was starting to think I wasn’t going to catch anything I finally had a bite on my five of diamonds, which would prove to be the only lure I would catch fish on. After a few minutes of fighting I had the fish subdued and deployed my collapsible net with one hand (yes I had practiced to make sure I could), only to realize the fish was much to big to fit. After thinking of what to do for several seconds I decided to try to land the fish by hand, which I hadn’t done with a fish this size before. It turned out to be much easier than I had anticipated. After a few pictures and a quick measure the 40 inch fish was released. I fished for a while before calling it quits and vowing to be back to catch more fish tomorrow. 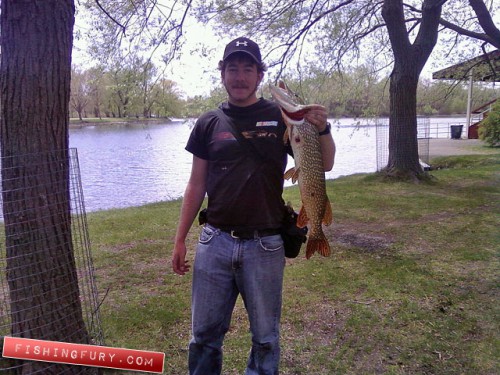 The next day was a success as I caught a 30” and a 22” pike. The 22” inch sized pike seemed to be fairly typical of what I caught over the next few days, one spectacularly released while I was holding it up by the line for a passing tour boat when it flailed, spit the hook, plopped to the beach and flopped back into the water. I’m sure I gave a few people on the boat some pictures to laugh at later. I believe last fish I caught was another 30” pike before Jonathon and Clive showed up doing a TV show and bringing bad luck with it. Despite the bad luck it was still good to meet them, they gave me a bit of fishing tackle and even showed me a secret spot that I plan to use next year. 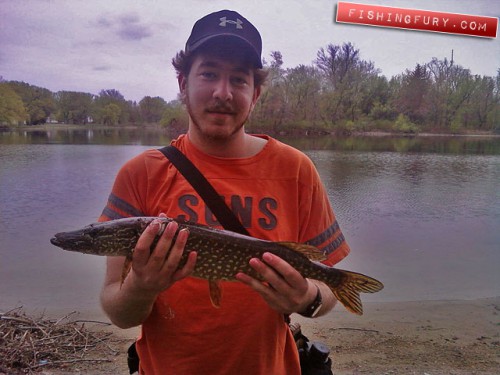 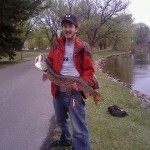 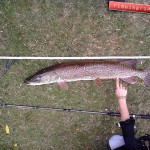 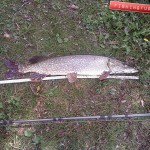 Thank you for your entry in our 2010 Contributor Contest. We’re glad to see that you found some awesome fish thanks to information you found on this blog, we were very pleased to meet you while fishing the islands, and we’re very sorry about those bad mojo tv cameras! We’ll be sending you a copy of Fins + Skins magazine for your efforts!