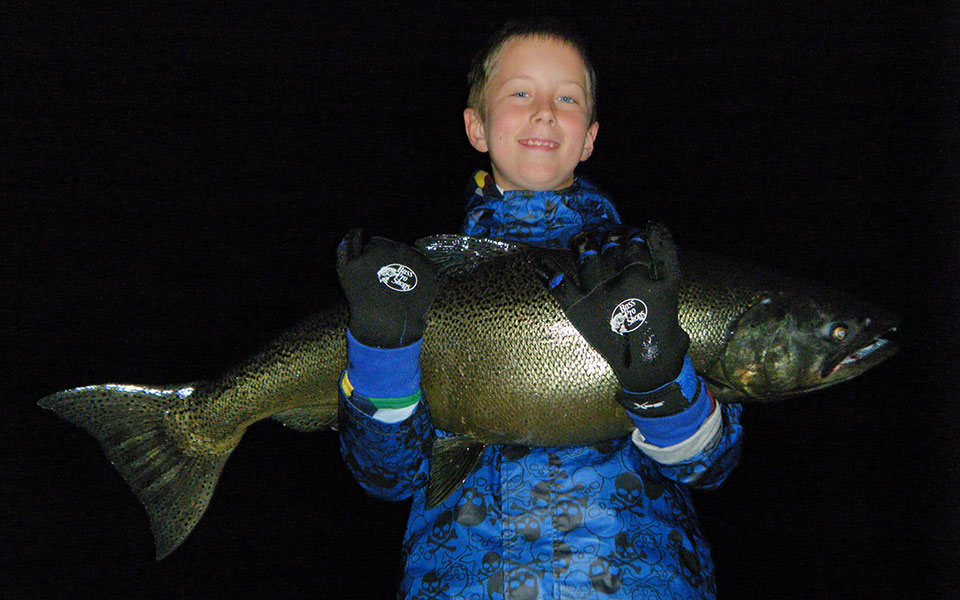 Posted on March 7, 2013 by Jonathon Marshall
No Comments

My Dad and I headed down to the Lake. We have a little dinghy that we paddled into the deeper part of the basin and anchored. We were casting for about 20 minutes, when a massive hit on a spoon made me jump. I gripped it hard as the fish tried to get away. I think I fought it for about 10 minutes. The fish went around the dinghy and tried many short runs, but my drag was pretty firm, so he didn’t go too far. It’s bad when they go under the boats, because then they snap the line. Once it tired, I reeled it closer to the boat and my Dad netted it for me. My arms were so tired afterwards. That was the hardest fighting fish I have ever caught and the biggest. It was 37″ and 22.5 lbs. I couldn’t fish anymore after that. 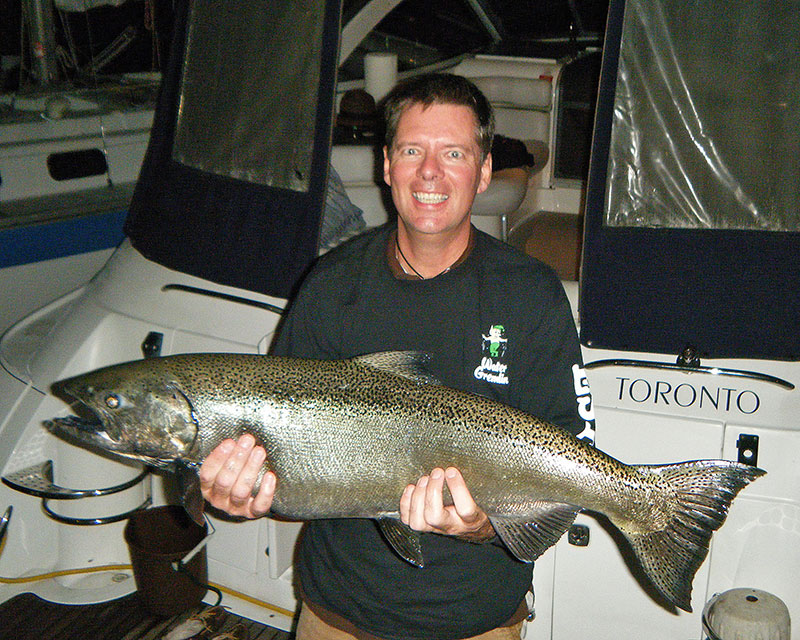 The Chinook Salmon is of course native to the Pacific coast, but not actually all that common to catch in those waters. For that reason, we are spoiled here on Lake Ontario with such an abundance of Kings. I’ve fished for them while tolling deeper waters on the lake and it’s fun for sure, but they pretty much self-hook and then flop along after the boat without much of a chance, so it’s an uneven fight.

However, hooking Kings from shore gives you immense respect for their strength and energy and takes it out of me every time. It’s an adrenalin rush and a full work-out and just so much fun. 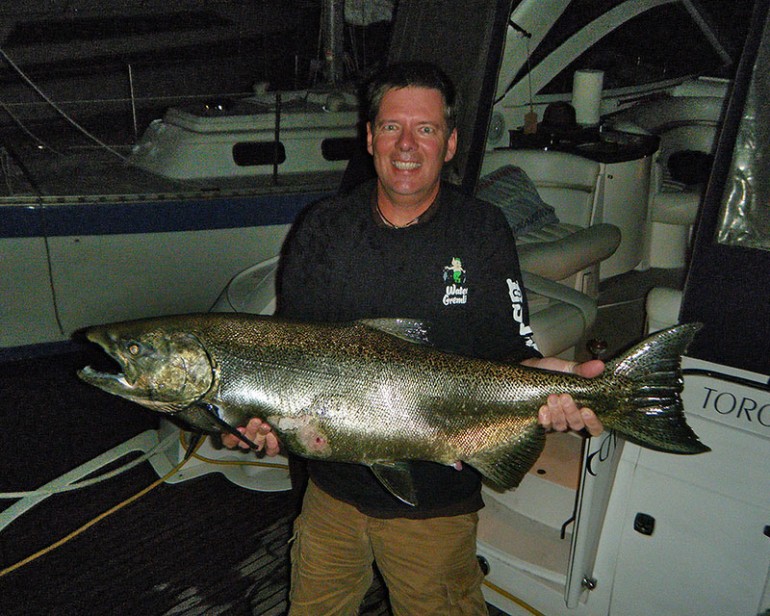 This fall I managed to hook and land eight Kings and each one fought like mad. The first day of the fall salmon season at Bluffers came after some rain on September 5th. It only took a few casts into the deeper channel till I hooked one. It fought pretty hard, but eventually tired and I hauled it in – a good 32″ and 20 lbs. I think I cast three more times and hooked a bigger beast that fought like it was possessed. I was sweating and he exhausted me, but got it in eventually – 40″ and 26 lbs. After two more casts I had another and based on that fight it had to be even bigger. The fight went on for a long time, but it tired and I started gaining and reeling it in eventually. It had a little energy left and made another smaller attempt at a run. I fought back, but then hooked my line in a boat anchor and snapped my 50 lb braided line. So I took another rod, cast and hooked another right after. This time I was so exhausted from fighting the three beasts that I didn’t have the energy to set the hook hard and it spat the lure out within a few seconds. I think I was almost relieved about that.

This year was by far the best shoreline salmon fishing for me and I look forward to next year, hoping the fishing will be just as great.

This massive Chinook Salmon was caught by fishing guide Tyler Mills, and tourist Deborah Whitman-Perry, in British Columbia near Rivers Inlet. The battle was hard and lasted almost an hour, but was finally landed. The salmon tipped the scales at 38 kilograms (almost 84 pounds!), more than twice that of the line strength used, and was live released in hopes that it will spawn again this year. 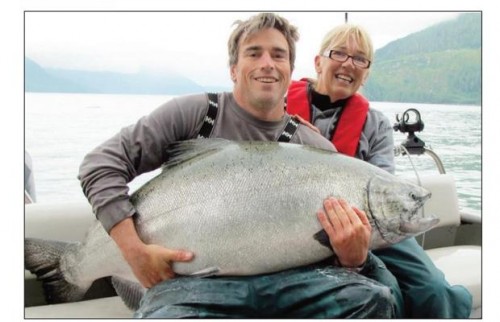 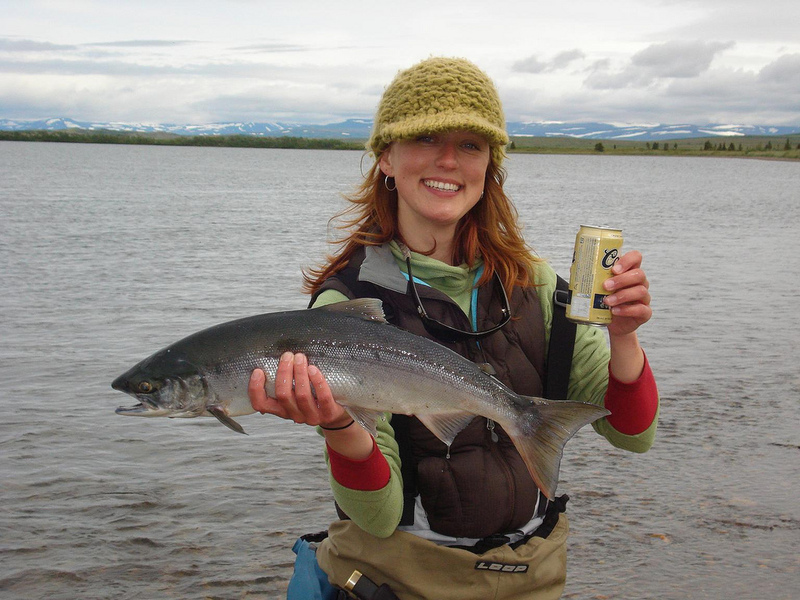 You can’t go wrong when you combine fishing, beautiful women, and beer. Ok, maybe they could do something about their choice in beer, but I’m too busy smiling to complain. :D 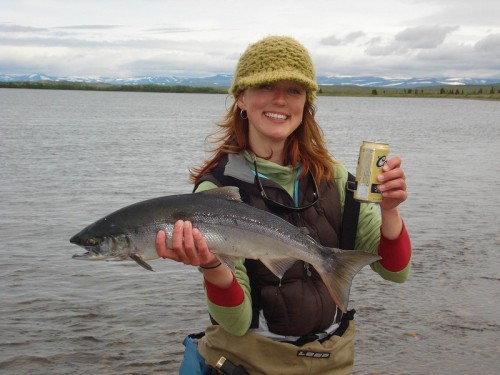