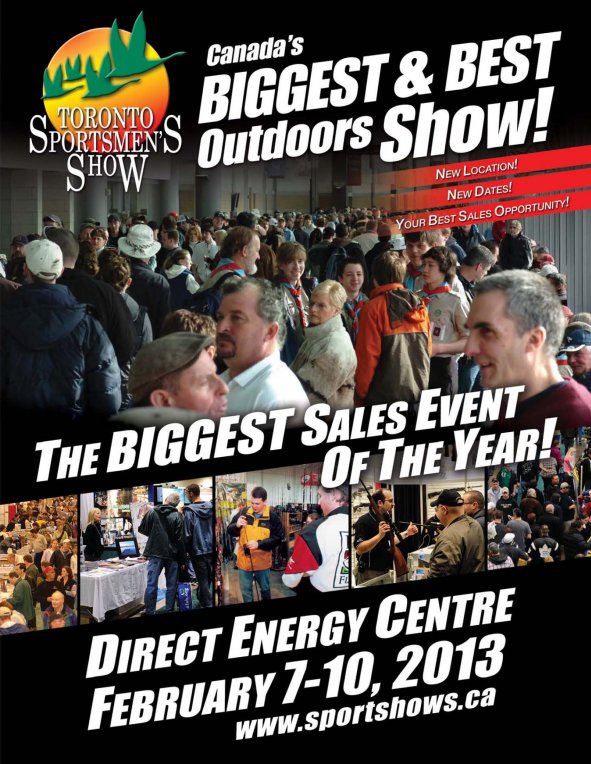 The 2013 Toronto Sportsman’s Show is just around the corner, and this year it promises it will be bigger and better than ever! This year’s event will be held at the Direct Energy Center, Exhibition Place, running from February 7th to 10th. We’ll be there documenting this event and looking for some deals!

One feature you won’t want to miss is the Berkley School of Walleye Fishing. Berkley Pro and full-time guide, Sheldon Hatch, will be hosting the show.

Visit torontosportshow.ca to save $3 off the price of an adult admission for a limited time. 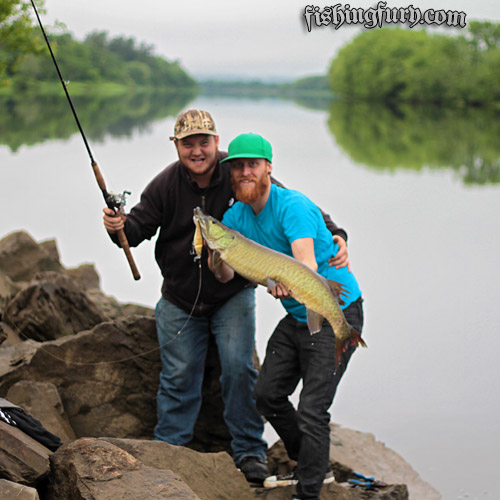 The new year has come and gone and spring is here, but we just realized we didn’t post about our favorite fishing events and products from 2011. I spent a lot of time on the water last year, well over 100 days fishing. And for the first time in years I didn’t catch any personal bests. In 2011 both Jon and I spent majority of our fishing time testing new equipment and learning new ways to fish.

I fished with more new lures this year than ever before. Its hard to pick just one favorite lure for 2011, so I’m going to pick a few here. The DUO Realis Vibration, the DUO Terrif DC-12, Phantom Lures, and the Super Cisco all come to mind immediately when I think back on 2011. 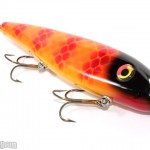 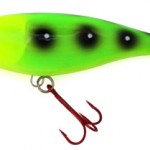 I only tested out a few rods in 2011, but I really loved two of them! If you want an amazing muskie rod at a reasonable price, the rods from Tackle Industries are absolutely amazing. Everyone who tried this rod said the same thing, they loved it. Despite its size, it was light and could cast heavy lures with zero effort! I didn’t expect to like any rod as much as the the Tackle Industry rod, but when I got my hands on a Kistler Magnesium rod, that all changed. The Kistler is without a doubt the best rod in my collection! 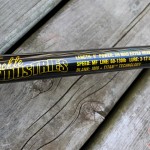 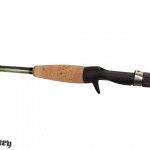 When it comes to casting distance, their was really only one winner in the line category for 2011, and that of course is Sufix’s 832 superline. While I’m still not 100% sold on this line, there is no denying that it is the longest casting line I have ever used! When it comes to strength, Tuf-Line XP stood up to tarpon after tarpon in the Virgin Islands. Even after dozens of battles around bridge pilings, Tuf-Line never let me down! 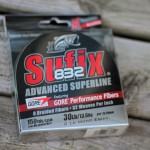 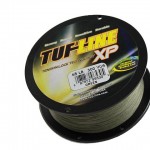 For you regulars here, this is the part where you probably expect me to pick the stunning Van Staal VM150 as my favorite reel. There is no doubt that this is the best looking, most powerful, well built new reel we got out hands on this year, but I cant say it was my favorite. For that honor, I’ve got to go with the lowly, boring (by comparison) Shimano Cardiff. While this reel isn’t exactly new for 2011, it was new to me. Now I’ve used the previous generation Cardiff, and seen it catch some stunning fish, but this new to me Cardiff 401A stood up to more big fish in 2011 than any other reel I own. To be honest, I only bought this reel because I couldn’t afford the Curado that I really wanted. IT was a decision that I almost immediately regretted too. I got the reel for muskie fishing to replace my beloved Quantum Cabo and I quickly learned that the Cardiff was terribly uncomfortable and clumsy for casting big musky baits. It wasn’t until I got the Cardiff into some saltwater that I discovered its true calling – bridge fishing! More on that another day… 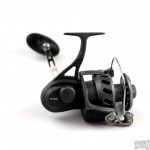 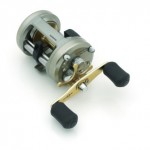 This is another tough one. I’d like to mention Lunker Tools here though. This is a product we were sent to review that I didn’t have high expectations for. I’ve used a lot of fishing tools over the years and figured these tools would be just like any other low priced tool. But I was wrong. The first time I used them I knew they were well made and looked good. I even put them though some serious testing in salt water and they stood up to everything I could throw at them! Read about Lunker Tools here: Lunker Tools First Impressions. 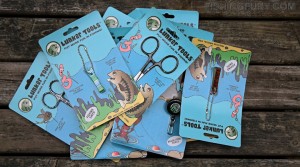 My biggest surprise though, came while fishing solo in the British Virgin Islands. While I haven’t posted the full report yet, I’ll share this story now anyway. I was fishing one of my favorite spots late at night and had been fighting a 30+ pound tarpon for about 15 minutes. I was just about ready to land the mighty fish and was standing on a wobbly rock about 2 feet from the water. Normally I get in the water to release these fish safely, but just as I was getting ready to step in, a massive 8-10 foot shark appeared from the darkness and attacked my tarpon with the relentless aggression only a big shark is capable of. I’ll save the details of the fate of the tarpon for the full report!

Its hard to pick just one great fishing moment in 2011. While I had some great adventures fishing by myself, my favorite moment came in mid June. I managed to convince my brother in-law and one of our mutual friends to join me on a 450 km trip west to Fredericton, New Brunswick to chase the fish of 10 thousand casts. Anyone who knows me, knows just how much I love members of the esox family, and there are few fish I’d rather fish for than the elusive muskie. As muskie fishermen can attest, muskie fishing ain’t easy. I may or may not have mentioned that to the boys until we arrived at our destination. I told them if we did manage to catch anything, I could promise that it would be the biggest fish they’d ever catch. That wasn’t a lie either. Neither of them had caught a fish in years, and the biggest they each had caught was no more than a pound. The moment came within the first few hours of fishing. The boys were all smiles. Not even 10 minutes apart, both of them had caught the biggest fish of their lives! Read full report here: Fathers Day Fishing Adventure) 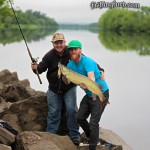 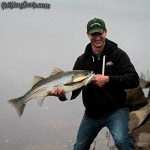 The rookies land the biggest fish!

For many of my friends who don’t fish, 2011 will be remembered as the year of the beard. I spent a good 8 months growing a beard much to the dismay of my friends and family. I’ve always said big beards equal big fish, and I really put that theory to the test. It wasn’t easy. For those of you not capable of growing a beard, let me tell you a few things. Its not easy being a beardo. Just about everyone stares. Children are frightened. Women are disgusted. And men, well I can only assume they were jealous. To make matters worse, not only did I have a startling beard, but I’m also a freckle faced ginger. As many of you know, the gingers are perhaps the second most discriminated peoples on earth, right behind Newfies.

For me, 2011 will be forever remembered as the year I was able to turn several of my good non-fishing friends into fishermen. And not just fishermen, but passionate fishermen. Not only passionate about catching fish, but passionate about learning new ways to fish, passionate about lures and rods and reels too. Best of all, many of them got out of the city more and became passionate about exploring and respecting the wilderness around us. I ‘ll never forget my first Tuna fishing Adventure, despite coming home defeated. There are plenty of adventures yet to come in 2012, and heres to hoping each and everyone of you get to spend more time on the water!

Chris Jones of Piscatus.net recently posted his review of Spiderwire’s new Ultracast Invisi-Braid line on our forums and I was so impressed with his review that I asked him if I could republish it here in full. Luckily for us, he agreed! When you’re done reading go checkout Piscatus for some mouth dropping photography.

Since the dawn of the superline revolution I have used Fins PRT and Tuf-Line XP exclusively, depending on which one was available in my time of need. Both lines are very reasonably priced, have the right mix of memory and suppleness and have fairly low diameter for their test. I have even heard more than once that they effectively come out of the same factory but I can’t find any evidence of this.

So it came as a surprise to me when I went against the grain a brought home a spool of Spiderwire Ultracast Invisi-Braid to fill the new Stradic CI4. At almost twice the price of Fins and Tuf-Line this stuff had to be great! 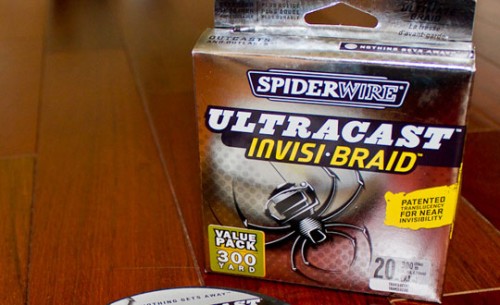 END_OF_DOCUMENT_TOKEN_TO_BE_REPLACED

TightLinz is a great site for fisherman looking for premium brands at a serious discount. They carry all kinds of gear, apparel and accessories from well-known brands. Deals get updated weekly, but the best items sell out quickly so check back often!

Right now the have some fantastic deals on Howler Brothers apparel, FishGillz sunglasses, and more! TightLinz is also donating 1% of all sales to the Recreational Boating & Fishing Foundation.