One of my favorite places I have ever visited is a small island called Anegada. It is one of numerous islands that make up the British Virgin Islands. The very first time I visited Anegada I was around twelve years old. I knew nothing about the island and left my fishing gear behind as my family and I went for a two day camping trip. When I saw two men getting on the plane with fly fishing rods I knew I had made a mistake. After a ten minutes flight from Beef Island airport, we landed and Anegada which appeared to be completely flat, a stark contrast to the other Virgin Islands. We spent some time exploring the small island and snorkeled around the beautiful reefs. We saw many large fish and sea turtles and I saw the biggest barracuda I have ever seen, which was pushing six feet in length and was bigger then me. Before we left the island I ran into one of the fishermen and he showed me a video of a fish he caught that morning on his handy cam. It was a five foot long barracuda. I spent the rest of the day sitting at the end of a dock watching tarpon feed within casting distance and I pouted all the way home.

Since that first visit to Anegada I have visited three more times. I always make sure to take my fishing gear, but try as I may, I have not been able to catch a big barracuda. I have caught several jack, small barracudas and small sharks during my visits, but I have been unable to land a big fish. When my girlfriend Gillian and I decided to move to the British Virgin Islands I made sure to stock up on all the lure and flies I would need in the event that we took a trip to Anegada. On Friday December 23, 2005, we took that trip and I was determined to catch my seemingly uncatchable great barracuda that I had dreamed about since my first visit to Anegada more then ten years earlier.

We awoke before the sunrise and gathered all the belongings we needed for our trip. Rather then taking Christmas gifts with us, we had an early Christmas and opened our gifts the day before. We walked down our long dark driveway to the main road and waited excitedly for our taxi to arrive. I had arranged for a taxi to take us to the ferry docks the day before since we have no car and live on top of a mountain, but we were both concerned that he may not show up in time to get us on our ferry, or even show up at all. Luckily he showed up perfectly on schedule and we raced down the mountain toward the ferry dock as the sun rose in from the east. We thanked our driver and wished him a merry Christmas then jumped on the ferry and began our adventure as two large cruise ships pulled in to port.

It takes approximately an hour and a half for the ferry to get to Anegada, which includes a quick stop at Virgin Gorda, a neighboring British island. Some dark clouds moved in as the sun came up and I was worried our trip would be a wet one, but the wind carried the clouds away from us and all we were left with was two rainbows. We headed toward the sunrise as another large cruise ship went passed us in the opposite direction.

Anegada is so flat that you can barely see it by boat until you are very close.

We arrived safe and sound and immediately jumped in a taxi and headed to where we were staying, Cow Wreck Bay. We spent much of the day lounging around, sipping pina coladas and swimming in the crystal clear water. We decided to do some fishing once the heat of the day subsided and we walked west down the beach casting GULP! Sinking minnows. We didn’t see any fish as we walked, but in the distance we noticed some birds diving into the water near shore. 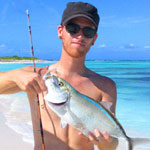 As soon as we arrived at the spot we saw a small school of bait fish darting arund. Gillian hooked into a small barracuda within the first few minutes and then we saw a very large barracuda lurking within casting distance. I made a cast just beyond the mammoth fish and started a quick retrieve, and then I felt a heavy weight on the end of my line. Line peeled off my reel but I could still see the barracuda swimming slowly toward me, I had caught something else. Once I got the fish close I saw it was a nice sized blue runner jack, also known as a hard nose jack. We photographed the jack and released it and attempted to catch the barracuda again. We spent ten minutes and tried various lures with no success and eventually the barracuda swam away to deeper water. We headed back to our villa for dinner and on the way saw a five foot shark swimming near shore. A few casts showed that the shark was not interested in our lures so we called it a day.

The next day I went out by myself to the same area the birds were diving. As I arrived at the spot a saw a small shark swimming away from shore. I decided to use a silver spoon and within the first ten minutes I knew I had made the right choice. There must have been a school of blue runner feeding on the bait fish because I kept catching them one after another. The key to catching jack is to use a very quick retrieve. If you see one follow your lure, speeding up the retrieve will often make the fish strike. The action stopped as suddenly as it began and after thirty minutes of catching only seaweed, I headed in. We had a quick breakfast and then rented a scooter to tour the island. We hoped to see some of Anegada’s famous flamingos, but a visit to the fresh water ponds yielded nothing but an empty view. We began to drive to the east end of the island as dark clouds started moving in. The rain started lightly, but within minutes it was pouring. We would have stopped to seek out shelter, but Anegada has very few trees and we were not close to any man made structures. We made a quick stop for lunch once we reached the east end. The rain passed, but the skies were still gray. We headed back toward the west end and stopped on the south shore to check out the flats and another oncoming storm. We decided that we had to leave quickly unless we wanted to get soaking wet again so we raced down the road as quickly as the scooter could go back to the shelter of our villa.

The scenery of Anegada