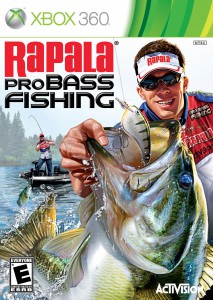 The road to creating a great fishing video game is very difficult, which is probably why there are so many bad fishing games out there. Trying to please fishermen and gamers alike is even more difficult. Today’s gamers demand more than ever in terms of graphics and entertaining gameplay while fishermen want an game style that feels like fishing. A good fishing game doesn’t have to capture every aspect of fishing, it only has to capture the rush you feel when you’re fishing.

Rapala and Activision have teamed up to combine their respective fields of expertise into an entertaining and immersive video game for every major gaming console (PS2, PS3, 360, Wii) and handheld (PSP, DS, iPhone/iTouch/iPad). Unfortunately I can’t review the game for every platform, though I may pick up the iPhone version later. I was however lucky enough to receive Rapala Pro Bass Fishing for the 360, complete with the full motion fishing rod controller, and since I was home sick with the flu it provided the perfect opportunity to really sit down and grind some lakes.

Rapala Pro Bass Fishing (Rapala PBF) has several game modes including tournament, free fishing, and head-to-head two player mode. Tournament mode consists of three levels, amateur, pro, and legendary. Each level has 4 tiers of of competitions you must complete with enough points to move on to the next. The competitions are a nice variety of different game types. You’ll need to catch the biggest, longest, or most of a given species in the time allowed. There are also secondary goals that can get you those few extra points you might need to move on, so check the event details.

Free fishing allows you to explore the lakes without any time limits or guidelines, but scattered around the lakes you will find red floating rings with what look like giant spinning Rapala PBF coins in the center. These are the lake challenges, they are most often quick challenges you can pick off and gain yourself some achievements or sweet new lures and gear for your next tournament. Finally in head-to-head mode you and a friend can team up for some free fishing, or defeat all the challenges on each lake.

There are some specific gameplay aspects that apply to pretty much every fishing game out there, and can have wildly different implementations that can drastically effect enjoyment. How you go about finding fish can run the gamut of simple to strange. Rapala PBF took both a subtle and obvious approach, after all it’s better to lead confused gamers to victory than to another game. Once on the lake you’ll have a fish finder and map to help guide you, but if you want to find the fish quickly look for gathering flocks of birds, fish splashing on the surface, and hot air ballons are all good indicators of fish. In fact, in tournaments I would head straight to the nearest hot air balloon and this tactic kept me on top of every competition except for the legendary sturgeon battle. Landing a 100lbs+ sturgeon on 30# line is just as difficult as it sounds, but finding a fishing spot with fish big enough to place in the tournament was very easy.

Being a Rapala game, you know that you’ll be fishing with lures you know and use in real life. I dare you to name your favorite Rapala lure and not find it in the in game gear list. With 49 lures in total you’ve got basically Rapala’s entire line and several great picks from Storm, Luhr-Jensen, and Trigger X, and that’s not counting rods, reels, fishing line, boats, and more! When choosing your lure the built-in fish-o-pedia will tell you if you’ve made the right choice for your target species, 1-2 stars will attract some fish but you’ll need to work hard for them, and at 3-5 stars fish will come running. Both line weight and lure size will also effect the attractiveness of your lure.

Once you’ve attracted and hooked into a fish you’ll want to keep them in the center of the screen marked with the corners of the square. If a fish gets to the edges of your screen it will strain your line and hooks, too much strain and the fish will get away. If you keep the fish in the center of the screen long enough for the bar on the top to fill you’ll be able to use your special ability and if executed correctly will repair both your line and hooks. There is also a balancing mini challenge when big fish are jumping, you’ll need to get the reticule in the highlighted area and press a button or the fish will throw your hooks and get away. Once you get the fish near the boat you’ll automatically land the fish. However, if the fish is only a few pounds or less you can actually flip them into the boat, this is a great time saver for tournaments- which is probably why the pros do it.

Rapala Pro Bass Fishing has licked and stamped every aspect of fishing gameplay. Once combined with the fishing rod controller you’ll read about below, the immersive nature of the game really takes over.

Gameplay is a difficult thing to master in a fishing game, but Rapala Pro Bass Fishing has definitely pulled it off!

The graphics in Rapala PBF are nothing short of spectacular, I was very impressed with the environment modelling and water layers and effects. All of the models look great, all players, fish, and lures alike are crafted and skinned very well. Most of all there are no major flaws in the presentation. I’ve seen games where simple mistakes are made that really throw off the game for me, sometimes the character models are swimming in the uncanny valley or look like they’ve just contracted tuberculosis. I’ve even seen games where the player model is holding the reel upside down! These types of mistakes will cause a real fisherman to discount your efforts as you obviously don’t know what you’re trying to replicate. Naturally, with Rapala being one of the largest fishing companies in the world these types of mistakes don’t happen. 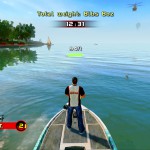 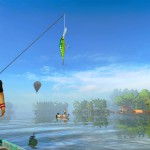 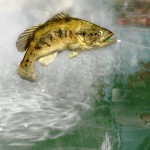 As I stated previously there’s no shortage of high quality models of actual Rapala lures, there are nearly 50 in total, most of which come in 5 or more different patterns. There are over 25 different trophy species that you can catch, all of which look like their true life muse, and the models scale up nicely depending on the size of your catch. The overall menu and user interface design are well done. In the videos I’ve made I haven’t turned off any of the extra in-game heads up options so they’re all on it is a bit cluttered, this helps when you first pop the game in and haven’t played before, but after your first hour or to you can turn some of these off. The audio and sounds were also well done, though I did think the announcers were a bit repetitive at times, you can always turn them off.

There really are so many fine details that you will pick up on as you play the game that it’s almost impossible for me to list them all. The graphics really pull the gameplay together in to a spectacular show that’s sure to entertain any fisherman.

Graphics are absolutely awesome, and the audio too! 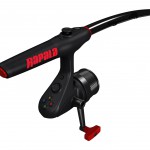 The fishing rod controller is truly what makes fishing games feel like fishing games and without one the game feels entirely different. The Rapala PBF controller comes in two parts that snap together permanently and the crank can be fixed to either the right or left side to accomodate all players.

Rapala’s custom controller is most definitely the best way to play the game, but I did spend some time experimenting and playing the game with a traditional xbox controller, and I found the control scheme to be very efficient and easy to adjust to. The game definitely loses the intense fishing feeling, but no fun was sacrificed by switching to the regular controller. In fact I found the casting challenges were much easier to complete with the regular controller, but only because I could quick press B to abort my cast with no penalty.

One of the most interesting aspects of this is that Rapala has also created full motion retrieves that mimic those used when actually fishing. Ripping a husky jerk or xrap through cover really feels like fishing. The retrieve styles are also accompanied by a “coach” to help guide you along the correct motions, and once you’ve got the rhythm your lure will start playing a signature tune that also increases your lures appeal to fish- a perfect cast improves this further.

There were a few extra bells and whistles missing from the controller such as vibration. However, because Rapala’s controller is wireless and relies on two AA batteries, which are included, these features were probably left out to improve battery life. That said, I’ve played over 20 hours of Rapala PBF on the included batteries and they’re still going. So, I can’t fault them from dropping those features in favor of battery life. Having to change the batteries after a few hours of intense play would have definitely ruined the fun for me.

Controller is light, wireless, and gives the game a realistic feel. You don’t need the fishing rod controller, but you’ll definitely want it.

When everything is said and done, and you step back from all those thoughts about gameplay, mechanics, polygons and wireless controllers and how the game works. You can finally sit back and enjoy Rapala Pro Bass Fishing for what it is- the best fishing game for the Xbox 360, period. 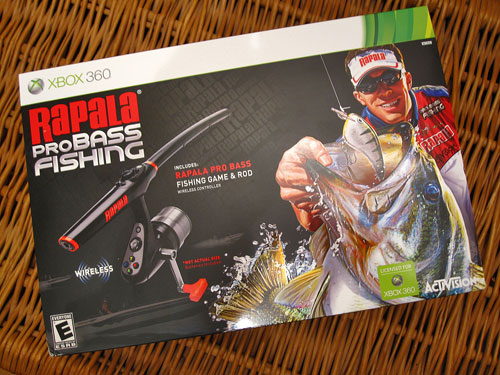 Rapala Pro Bass Fishing has set the bar for fishing games on the 360 and it will very difficult for future games measure up.