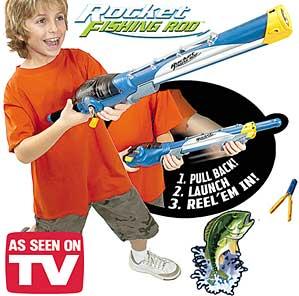 After a long day of casting 8 inch plus baits, pulling big in-lines over weed beds for 8 hours, we all know the pains of a long day on the water. Naturally the thought of blasting out my bait of choice felt like icy hot on my sore shoulder. Okay now getting serious – The rocket fishing rod is made like most lures are: to catch the angler or in this case the kid and not to necessarily catch fish. 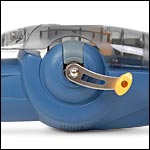 The rocket fishing rod leaves a lot to be desired. The rod is more of a pump-action cannon that shoots out a pod. Inside the pod is your lure/bait of choice and a bobber for the visual aspect. The inside of the cannon is a closed faced spinning reel, the kind that most of us started out fishing with. There is no actual rod, so playing a fish is not possible. Head shakes are undetectable and all a little angler can do is horse that fish in. Shooting the cannon may be the only fun you will have on this fishing apparatus. While the design is clever, it is not practical.

The boys and I tested out a Rocket Fishing Rod this past summer and our results were poor. Average cast/blast was 20 ft and getting the pod to release the lure was a challenge at times. The Rocket Rod is also prone to birds nest after birds nest, sometimes stopping a blast short of hitting 5 feet due to the line crossing over.

My two boys (ages 5 and 7 at the time) fought over who would get to blast the lure, but once the novelty wore off, my oldest decided to go back to casting his ultralight. He wanted action, and if there is one thing that Rocket Rod lacks it’s action. When using a normal rod and the fishing gets tough, it’s easy to tie on a new lure and teach the boys a new tactic. If the fish aren’t biting, at least they are kept busy by the action they are creating using a new lure.

When a fish did decide to hit our rocket line, there was no play and the boys asked if the fish was still on. It was no where near the excitement they were used to from a decent largie thumping and shaking that ultralight in their hand. The Rocket Rod actually did the opposite and made fishing boring instead of making it exciting.

As an angler, this apparatus goes against what I consider the basics to fishing. Knowing what rod, reel and line to use, along with proper presentation is the key to success. These fundamental basics are left out when blasting with the Rocket Rod.

I am happy to say the Rocket Rod has not wet a line since and it hasn’t been my decision. It sits on the kids rack of rods and never gets grabbed by either of them. In the words of my oldest son, “Dad I can cast twice as far as that thing can blast.”

Take your kids fishing. Teach them the same way you were taught and don’t get caught on gimmicks.

Save the 30 bucks and spend it on a reel set up for your kids. Trust me, in a few years they’ll thank ya.

A fishing rod with a stupid gimmick. If you’re serious about fishing, don’t bother.