Happy Fathers Day to all of you dads out there! I’ll be making my second annual solo muskie fishing trip to New Brunswick. Last year I spent most of my day fishing from shore, but this year I’ll be in a kayak and hopefully I’ll be able to find some productive water. The weather doesn’t look great, but hopefully the fishing is! 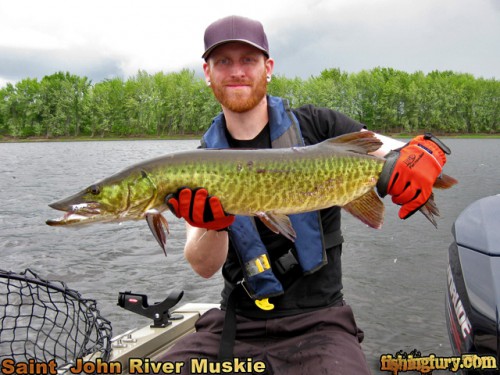 I’ve talked about the My Outdoor TV site before, but I’m gonna mention it again. I’m not sure if they are constantly adding new programs, or I’m just finding them all accidentally, but they have built up a collection of some of the best fishing shows from around the world. I just realized they have Fish’n Canada, one of my old favorites, featuring one of my favorite anglers, Pete Bowman. If you aren’t from Canada, you probably haven’t seen the show, but there are several really good episodes, and some not so good, but either way, check it out!

I got to try out a few Reaction Strike baits while muskie fishing in New Jersey – but sadly I never got to try out the “Home Wrecker!” Looks like a good lure to me! 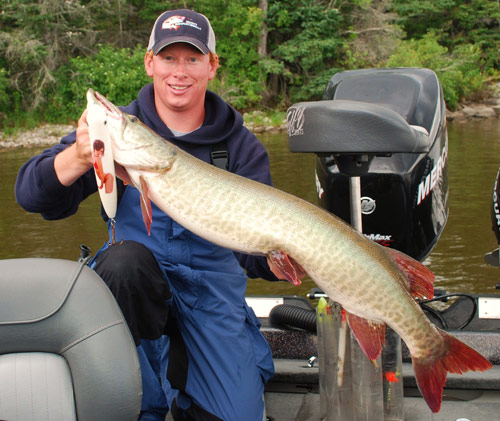 Click the image to see a close-up of the lure! (possibly NSFW)

When I originally started making Rockstar Lures, the target species was pike. Since then, the lures have evolved and grown in size and strength. I’ve put them to the test on some nice muskie but never any this big…

Out came my box of Rockstar inline spinners. The clouds finally cleared away for a few moments, so I switched my chartreuse inline spinner to one with a big silver blade to create some flash. First cast with the silver one and I was on. And it was big! A nice fight and soon she was in the cradle, which this time was handled like a PRO by Albert. Once in the cradle, I realized that this was another really long fish – and the tape measure proved me right, another 47″! 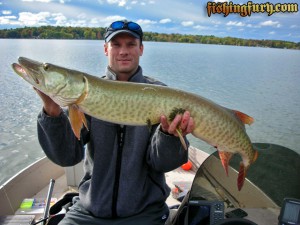 Albert and Marco immediately dove into my box of Rockstars and clipped them on. I had not even picked up my rod yet after my release when Albert, on his first cast, shouted out “There’s one… there’s one… right behind my lure…SHE’S ON!!!”. She had followed him in and then nailed it right at boatside! She fought hard, and kept trying to dive under the boat or head towards the motor, but soon she was cradled, and Albert had smashed his old PB of 36″, with a 42″! While helping unhook her, she got me good with her gill rakers, but I hardly noticed at the time. Some first aid would have to be administered soon after so I didn’t bleed all over Albert’s boat carpet! A few pics of the happy camper with his prize catch, and she released well. 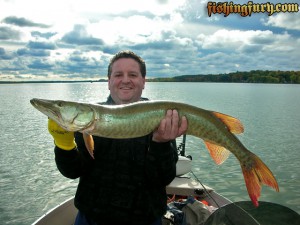