After a periodic showers though out the day I wasn’t sure how good the fishing conditions would be at night. I drove down to the east end of Tortola as it was getting dark and I set up my gear under the flickering lights of the bridge. The wind was blowing north through the channel causing ripples on the surface of the water distorting the view bellow. The current moved slowly to the north as well. I could hear and see a lot of action bellow. A good sized school of bait fish covered almost half of the channel on the west shore. In the distance I could see a few large tarpon surfacing repeatedly and the occasional glimpse of silver flashing through the air followed by a huge splash. Directly below the bridge numerous tarpon emerged from the shadows as the foraged for food. 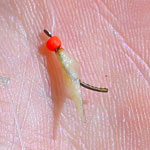 It didn’t take long to catch some bait, even with my severely damaged sabiki rig. Most of the hooks are now broken or missing completely. I like to keep two rods on hand at all times, one designated to catch bait, and one pre-rigged with four or five feet of strong monofilament or fluorocarbon as a leader. It is important to have a good two hundred yards of line on your reel in case you hook into a big one.

Once I had my bait in the water it wasn’t long before the action started. The tarpon were feeding aggressively and within the first thirty minutes I had lost two good sized fish. I have been using large circle hooks which are supposed to work very well, but when those tarpon jump they twist and turn in every direction throwing the hook more often then not. Time passed and I lost another tarpon, then another. I could see dozens of tarpon on both sides of the bridge and all of a sudden it became impossible to catch bait. I tried for thirty minutes with no luck and decided to switch to an artificial lure.

I fished off the south side of the bridge and let my lure move freely in the current. On some nights the current is too strong to fish this method well, and other nights it is too weak. Within ten minutes I had another tarpon on, and after two crazy jumps it to spit the hook. Unfortunately the tarpon had ripped the tail off of my lure so I switched back to live bait. It took a while, but I managed to catch a perfect sized bait. For some reason the tarpon wont go after bait that is over four inches. The best size seems to be just over two inches.

It was almost midnight and I was pretty tired. I switched to some smaller hooks and let out my bait. A six foot long shark came cruising by and grabbed my bait, but he too spit the hook. I was happy to get the hook back, the shark would have chewed through my line anyway. I packed up all my stuff and I was about to head home but I decided to stay a few more minutes. I went to the north east side of the bridge and dropped my bait right beside two good sized tarpon. I stepped back from the rail so I would not spook them and sure enough one of them took the bait. At this point I had lost six tarpon and I didn’t want to loose another. I kept my drag very loose and let the fish run for about ten seconds, then I set the hook three times to make sure the point passed through the tarpons tough mouth. The beast was not too impressed with that and proceeded to peel over a hundred yards of line of my reel in a matter of seconds. I planned to climb down the east shore to be able to land the fish, but I realized that my camera was in the middle of the bridge.

I made my way to the center of the bridge, grabbed my camera and swung it over my shoulder. The fish jumped several times and I leaned forward as it did, hoping that it would not throw the hook. On the third jump I felt the line go limp, I thought for sure I had lost another tarpon but then I saw it racing toward me. I quickly reeled in the slack line as the fish came all the way back to the bridge. It made another leap, and then took off once more. I maneuvered my way past the light posts and climbed down the west shore. I knew the only was I would be able to land this fish would be to follow it long the shore. I knew a fish this size could potentially pull all the line off my reel if I stayed on the bridge. 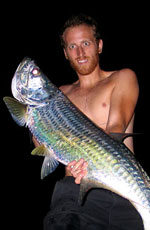 The fish made run after run, showing no signs of slowing down. I followed the fish down the shore for about two hundred yards, narrowly avoiding a tangle with a buoy. I found a flat area and I made my stand. At this point about thirty minutes had passed, but the fight was nowhere near complete. On several occasions I got the fish within twenty feet of the shore only to have it make a fifty yard dash. I set up my camera on a near by rock and stepped in the water when the fish was within ten feet. One look at me, and he took off, making another jump in the distance.

After a tug-of-war of epic proportions, I forced the fish to shore. As soon as it was close I grabbed at it, but it splashed me and made another run. Again, I dragged the tarpon back to shore. This time I tried to grab it by the mouth, but then decided to grab it under the gill plate instead. Once I had a good grip I reached over to my camera and pressed the timer. I struggled to lift the mamouth creature from the water, it was almost as big as me. I snapped two quick pictures and watch her as she swam off into the darkness.