Rather than facing the weekend boat traffic, we decided to take a midweek fishing trip for my birthday to a lake we had never fished before. Jon, Gillian and I packed up the car shortly after midnight and started our drive to Lake Chemong, located in the Kawartha Lakes region of Ontario. Much like other Kawartha lakes, Chemong offers great bass, walleye and musky fishing.

The drive took less than two hours from Toronto, and we drove around the lake looking for a boat rental in the dark. We spotted several fishermen night-fishing along the causeway that splits the lake in two. We slept a few hours in the car and and rented a boat from a very friendly woman in the small town of Bridgenorth shortly after six.

We started the day using plastic baits to cover shallow water and structure near shore and around several islands to the south of the lake. After a couple hours of fishing, it was clear that we were not going to find any bass in the shallow water. The sun was beating down pretty hard and despite being in the tail end of major heatwave, the bass were still not feeding. We began making drifts through deeper water hoping to locate isolated fish. Jon used jigs, trying to pull fish off the bottom, Gillian used live worms drifting them behind the boat, and I decided to cast my own musky lures hoping for a big one.

Gillian began catching several pan fish including crappie, sunfish, perch and then she landed a good sized largemouth bass which proved to be the biggest fish of the day. We fished a total of six hours and we each got a few small bass before we called it a day. 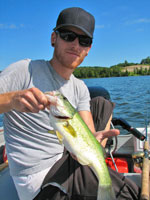 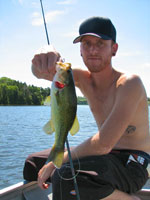 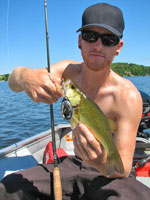 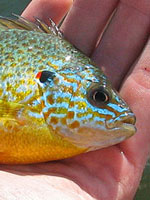