I’ve never known any one that actually held an official fishing record before, but that may change soon. Mike, a friend of a friend who I’ve fished with a couple time recently caught massive freshwater drum (or sheephead) in Ontario, that is set to be the new provincial record! Check it out. 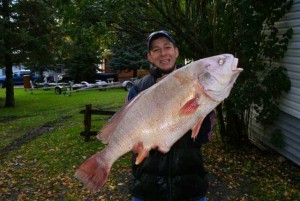 Fished Picton area on Saturday fishing was good weather was bad, a lot of rain…we managed 3 walleyes and my biggest weighed just shy of a 11lbs and was 30.25″!!! I also tagged into the biggest sheephead I have ever laid eyes on and it topped the scale at 22.2 lbs. I tried to release it after fighting it for 20 minutes pulled drag at least a dozen times for 20 foot stretches similar to a salmon fight but she wouldn’t go down so I looked up the Ontario record and it was 20.6 lbs. I’m in the process of getting this verified !!! I respect sheephead more then LM bass, very proud to take the record that’s been there for 17 years!!!! – Mike