St. Lawrence River near Ottawa Ontario is not only the countries capital city, but its the big musky capital of the world. Some may argue that point, but they’d be wrong. There are few bodies of water that can yield 50+ inch musky regularly. For years I’ve heard people saying the St. Lawrence would produce the next world record musky, and in November 2008, it did just that.

Dale MacNair, was on the St. Lawrence River in late November when he hooked on to the fish of a lifetime. A biggest muskellunge ever recorded. His incredible catch was 57″ long, more than 33″ around and weighed a earth shattering 77 pounds (35kg)!

Some fishermen spend they entire lives chasing a 50 inch musky, but after only one year in search of muskie, MacNair caught one that was almost 60 inches! 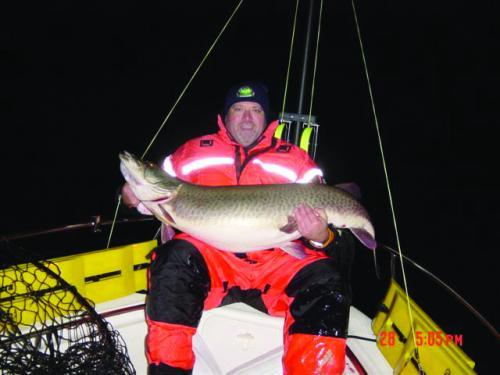 It’s a special occasion when such a massive fish is caught, but what makes it even more special is that this behemoth was released and swam away strong.