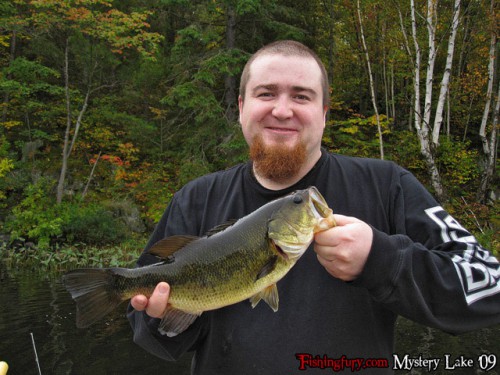 Even though the trip was planned at the last minute I spent a great deal of time preparing for this trip. I’ve been building a camera arm out of PVC to make it very easy to film underwater with my new Sanyo WH1 camcorder, this was just a simple prototype to work out the kinks and doesn’t look very nice (pictures later). I also made a trip to Bass Pro Shops to pick up a few new products and colour combinations that I knew would produce on this lake in any conditions. 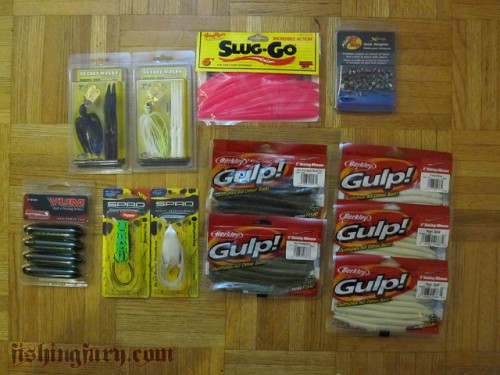 Mike picked me up from my place after I got home from work, it was about 7pm when we finally go on the road and though we wanted to leave earlier we were both equally excited about getting free from the gravity of the city and out in the wilderness. It wasn’t long before that fresh cold rural air was filling my nose and the excitement of what this weekend would bring was bubbling up inside me. About half way to our destination Mike stopped to get a coffee and show me this cool little tackle shop along the way. Unfortunately it was closed, I’d really like to check out the inside and meet the owner, we’ve clearly got similar tastes! If I had some stickers I would have left some. 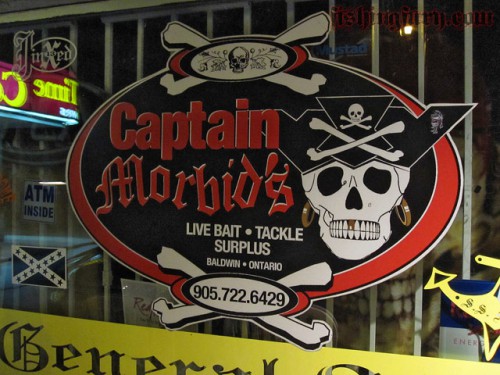 We arrived at Mike’s cottage late on Friday, around 10-11pm, after unpacking and getting the cottage ready we settled down and cracked open a few beers. Both of us knew we wouldn’t sleep well with a lake full of Bass and Musky waiting for us so we decided to set an alarm to start the day early. When we got up the sun was shinning and it looked as though it would be a perfect day, but the weather would only hold up until lunch.

After lunch the cloud cover came in and it rained off and on all afternoon, there was no lightning or thunder so we powered through the wet and cold catching one or two big bass in every bay. I had three rods setup, a spinning rod with a Berkley Gulp! Sinking Minnow in white or the new green with red flake, one baitcaster setup with a new SPRO popper frog, and the other with a new Booyah Boogee Bait. All three lures performed excellently for each application, I was most impressed with the new chatterbaits by Booyah the amount of vibration and action they produce in the water is very enticing. I will definitely be throwing some bigger chatterbaits as the fall progresses and big predators are packing on weight for the winter.

We continued moving around the lake but staying close to the cottage because of the unstable weather pattern. The topwater action died off as the cold swept in, we slowed down and changed our tactics. Mike discovered a great pattern slowly bouncing a weightless black and red flake Berkley Gulp! nightcrawler off the bottom and it wasn’t long until he was catching huge bass from right under the boat. The fishing was very slow, but the hook sets had to be fast and hard. I think he must have caught at least 12-15 bass on a single gulp, refreshing it every now and then in the juices of one of those gulp bucket baits to give it some extra power.

As the light slowly faded I made a final cast with my green and red flake sinking minnow, I let it sink all the way to the bottom as I packed up a few things and chatted with Mike. I popped the lure off the bottom a few times, nothing, a few more… BAM! A massive hit followed by a very deep and long run, the drag on my new Quantum Energy PTi has never screamed so loudly since I purchased it. I thought at first it could have been a huge smallmouth, it dove deeper and deeper, but not a single head shake. It wasn’t until she breached the surface that we saw her, a thick Mystery Lake musky! This beautiful musky was well over 40″ long and probably just over 20 pounds, my new personal best (my first musky ever was caught on Mystery Lake in 2004). 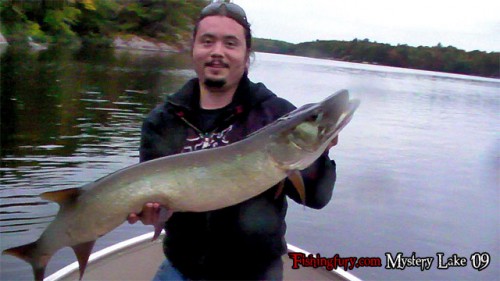 I couldn’t wish for a more perfect finish to the day, and one of the best birthday presents I could hope to receive! Moments after the release the weather picked up and started pouring down, it was almost as if it waited until we were done and the musky was safely released. Truly amazing.

We packed up the rest of our gear in the boat and headed in for dinner and a few beers to complete the night. That night we had strange dreams about fish and all manor of bizarre things mixed in.

Sunday was much like the previous day without the rain. We got out later that the previous day only because it was so dark and cold out in the morning. When we headed out the pattern was much the same with fewer fish, the cold front and storm last night were keeping the fish deep and lethargic. Occasionally the sun would peek through the dense cloud cover and the bass would turn on as the water heated up, the biggest bass were caught when the sun was in full view. 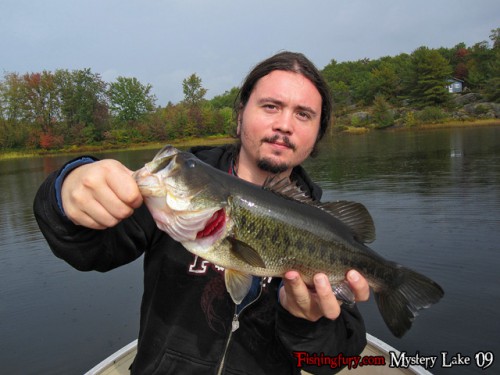 Time caught up with us too quickly and before we knew it we had to pack up and head back to the city. Mike and I talked about doing some extended stays next year, and possibly a portage to one of the untouched neighbouring lakes, I can’t imagine a lake more memorable than Mystery Lake, but there’s only one way to find out.